"Give me a home where the buffalo roam."

The American Bison is one of the quintessential characters of the wild frontier. Its stoic resilience through harsh winters and sweltering summers, as well as surviving the (not so) Great Bison Hunts the 19th and 20th centuries, embody the indomitable spirit which captures the hearts of admirers to this day. Working on this commission added immense value to my life, as observing these amazing creatures first hand was both humbling and educational. This illustration is done in traditional ink on brown cardstock. It is simple, to the point, and needs no further introduction.

"Willpower, Fear & Fortitude" is about recognizing the necessity of transformation and the willingness to undergo a change, in order to attain a goal that is currently out-of-reach. 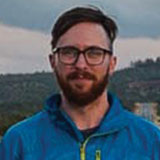 James possesses the reliability and dedication to his craft that I seek in both creative and climbing partners. He excels at contouring the physical and emotional energy of story lines in often challenging environmental conditions.
Jon Mercer
Key and Kitestring

Learn More About Me